Why Nobody Can Hack a Blockchain?

The blockchains behind most cryptocurrencies are peer-to-peer (P2P), open-source, and public, allowing everyone with the right equipment and knowledge to peek in under the hood. This is important to foster transparency and attract buyers.

A blockchain comprises different technological mechanisms working together towards a common goal. For instance, there are consensus mechanisms such as proof of work (PoW) and proof of stake (PoS) that protect the network by mitigating cyber-attacks from hackers.

A blockchain’s decentralized nature means that its network is distributed across multiple computers known as nodes. This eliminates a single point of failure. In other words, there is no way to “cut the head off the snake” — because there isn’t any head.

The architecture of a blockchain determines how the nodes cooperate in verifying a transaction before being committed to the protocol. In the case of Bitcoin and other PoW systems like Bitcoin Cash, a minimum of 51% of the nodes must agree to the transaction before commitment.

Each transaction is called a block, and the interconnection of several transactions becomes a blockchain. Notably, a block has cryptographic elements that make it unique. A network’s hashing algorithm determines the details. For example, the Bitcoin blockchain uses the double SHA-256 hash function, which takes transaction data and hashes/compresses it into a 256-bit hash.

By making it hard to reverse the hashed value, a transaction becomes inflexible. Each block in a chain contains a specific set of data from the previous block. Therefore, even if a malicious actor reverse-engineers the hash, the resultant block would be out of sync with the rest of the blocks since it will have a different hash output, thus causing the system to reject it. 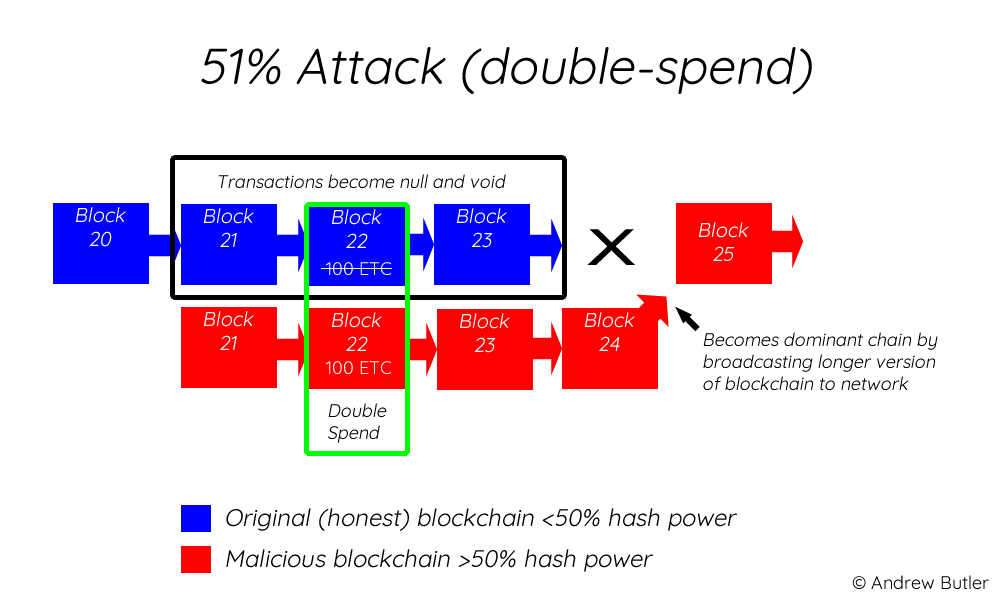 The longer a blockchain exists and the more new users it attracts, the less likely it is to suffer a 51% attack due to its growing hash power. You can’t orchestrate a stealth 51% attack without creating too much scarcity, as your purchasing of coins will make the available ones skyrocket in value to incredibly high levels. Conversely, when the blockchain participants find out you own a majority of the coins, they will likely sell their holdings, thereby crashing the market with excess supply. So you’ll end up buying high, and selling low!

Note that for a hacker to reverse engineer a transaction’s hash, they need to control at least 51% of a blockchain’s power.