Yep, Dogecoin is a cryptocurrency based on one of the most famous memes of all time. Remarkably, its comedic nature hasn’t harmed its survival. It boasts a dedicated community of users who have raised funds for a number of initiatives over the years.

The arrival of Bitcoin in 2009 opened the floodgates for digital currencies. Since its launch, thousands of alternative cryptocurrencies (or altcoins) have emerged to accommodate a vast range of use cases. Some seek to establish themselves as money, while others aim to fuel smart contract platforms like Ethereum.

Amongst the earlier coins, Dogecoin is perhaps one of the most unique offerings. It has captivated cryptocurrency enthusiasts since 2014. And in this article, we’ll explain why.

A brief history of Dogecoin

Dogecoin (DOGE) is an open-source cryptocurrency stemming from a fork of the Litecoin codebase. As the name suggests, it’s largely based on the Doge meme that took the Internet by storm in 2013. The original image depicts a dog of the Shiba Inu breed, whose inner monolog is displayed in comic sans font.
Billy Markus, a programmer from Oregon, initially came up with the idea for a sort of “joke” cryptocurrency. He reasoned that a more lighthearted coin would have a better chance of attracting mainstream attention than Bitcoin. Around the same time, Adobe’s Jackson Palmer stated that he was “Investing in Dogecoin, pretty sure it’s the next big thing” in a now-deleted tweet.
Following some encouragement, Palmer went on to create dogecoin.com. When Markus stumbled across the website shortly after its launch, he reached out to Palmer to make it a reality and began work on what’s now known as Dogecoin.
Upon launch, the cryptocurrency rapidly spread across social media. Within months, it hit a multi-million dollar market capitalization.

The Dogecoin community has earned a reputation for charitable contributions. It took off as a tipping system on sites like Reddit, where users would send each other small amounts of Dogecoin to reward content creators.

This giving spirit was echoed in its more ambitious fundraisers: in 2014, it raised over $30,000 worth of Dogecoin for the Jamaican bobsled team to participate in the Sochi Winter Olympics. The team had qualified, but couldn’t afford to get to Russia for the event.

In the same year, the community launched two other initiatives. Doge4Water raised another $30,000+ to drill wells in Kenya, and Dogecoin enthusiasts later sponsored NASCAR driver Josh Wise with over $50,000 in the cryptocurrency. As a result, Wise famously painted his car with the Dogecoin logo.

Tesla CEO Elon Musk has previously tweeted that Dogecoin “might be” one of his favorite cryptocurrencies. Following a community poll, he was jokingly declared the CEO of the coin.

In mid-2020, a viral video on the video-sharing app TikTok created a chain reaction, causing the DOGE price to rise significantly. A user called for others to join him in purchasing Dogecoin, stating that they would “all get rich” by buying coins and selling them once the price hit $1. The hype snowballed, causing Dogecoin to trade at over 2.5x what it had in the weeks prior. However, the pump was short-lived, and prices began to sharply decline afterward.

Note that this kind of activity could be considered a pump and dump. This type of scheme is illegal in traditional markets due to the dangers to investors. Promoters purchase large amounts of an asset before generating hype around it, causing others to FOMO into the investment. As a result, the price rises significantly (the “pump”). Then, the promoters sell their holdings, leading to the “dump” – with such high sell pressure, the price plunges as later investors are left with huge losses.

As always, do your own research into prospective investments. Binance Academy has a wealth of resources on trading and economics, which can help you better understand the cryptocurrency markets.

How does Dogecoin work?

Dogecoin is based on a fork of Litecoin (LTC) called Luckycoin. However, notable changes have since been made to the protocol. Let’s see how it works.

Similar to Bitcoin, Dogecoin uses a blockchain, where blocks are appended via Proof-of-Work. Network participants install open-source software onto their machines so they can act as full nodes. For those unfamiliar with blockchain technology, this means that each participant maintains a full copy of the database (which contains all transactions).

The system is decentralized because there’s no administrator that controls it. Instead, users send information directly to each other and rely on cryptographic techniques to tell whether their peers are acting honestly.

For a more comprehensive overview of this type of system, check out What is Blockchain Technology? The Ultimate Guide.

In Proof-of-Work blockchains like Bitcoin, a process called mining is used to create new coins. Participants must prove to the network that they’ve done “work,” which you can think of like revealing an answer to a complex puzzle.
The puzzle is solved by hashing information until the user can provide an output that the network will accept as valid. A solution can’t be feasibly produced by hand, so users instead dedicate electricity and computing power to try to find it.
One major difference between Bitcoin and Litecoin is that the latter doesn’t use the SHA-256 hash function for mining. This was an intentional decision – Litecoin instead relies on Scrypt, an ASIC-resistant Proof-of-Work algorithm.
In plain English, this means that the purpose-built machines used to mine Bitcoin wouldn’t be able to compete with regular computers and GPUs that were used to mine Litecoin. In theory, this would result in a more decentralized mining landscape. Before long, however, Application-Specific Integrated Circuits for Scrypt emerged.
As a derivative of Litecoin, Dogecoin inherited the Scrypt algorithm. To avoid any competition and to mitigate security risks, though, Dogecoin developers switched to a merged mining model, meaning that Litecoin miners could simultaneously earn Dogecoin. For an analysis of this, check out Binance Research’s Merged Mining in Dogecoin & Litecoin case study.
Dogecoin mining targets a one-minute block time and yields a block reward of 10,000 DOGE. There’s no maximum supply of units, and over one hundred billion are already in circulation. Enthusiasts view the removal of any limit as a good choice, as it incentivizes the spending of the coin and prevents early adopters from profiting disproportionately. 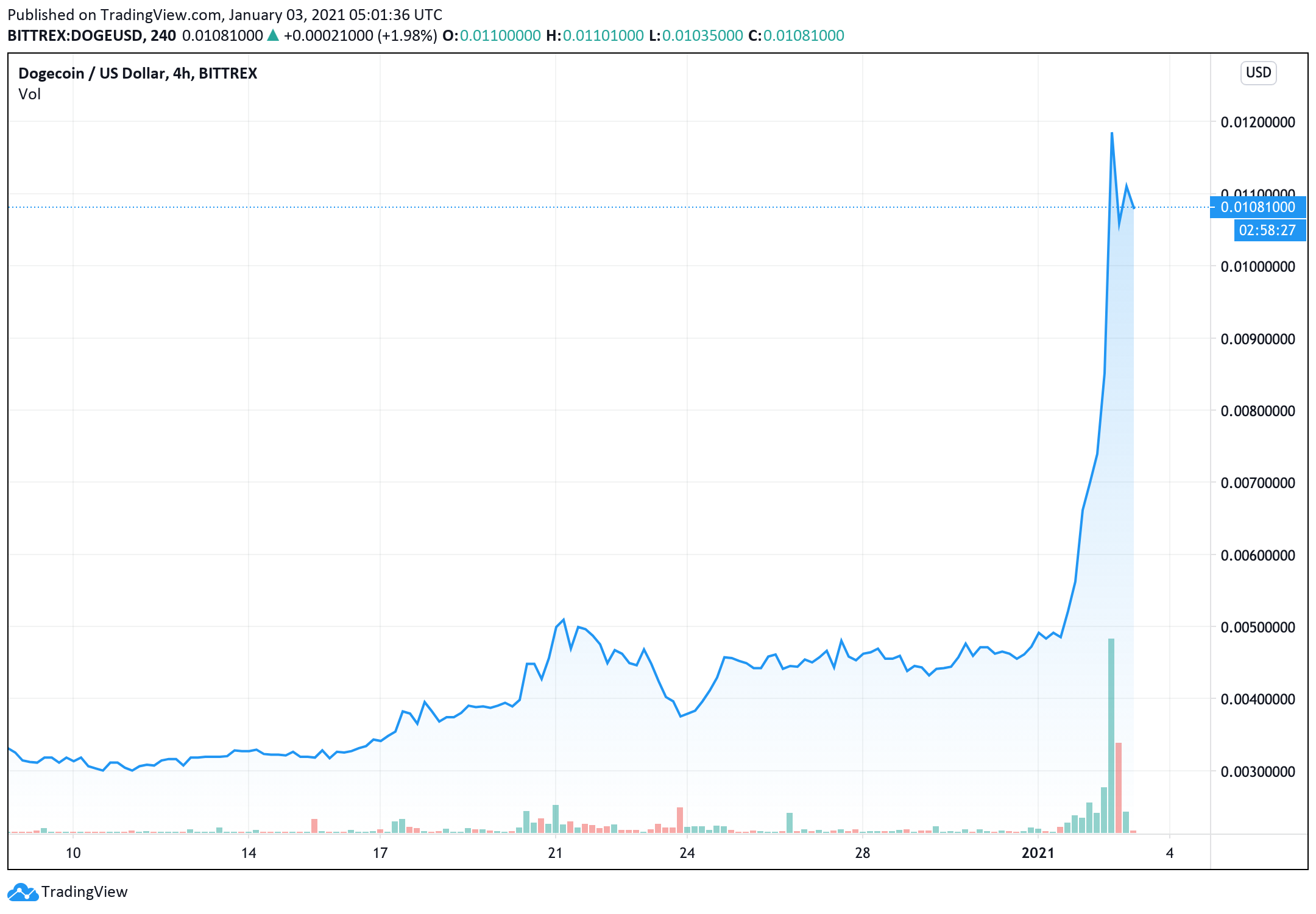 What can you do with Dogecoin?

Like many other cryptocurrencies, there are several ways you can acquire Dogecoin. You could mine it yourself, or accept it as payment for goods and services. The easiest method, however, is to purchase it via a cryptocurrency exchange. Typically, you’ll first need to buy Bitcoin or another popular coin, then trade it for DOGE.
Once you’ve got your Dogecoin, you can use it as you would any cryptocurrency – hold it for the long-term on a hardware wallet, trade it against other coins, exchange it for goods, or tip others with it. Bitrefill is perhaps the easiest way to spend, as you can purchase gift cards and vouchers for a range of retailers.

Despite being an asset whose existence revolves around an Internet meme, Dogecoin has developed a dedicated community of users. Six years on, it maintains a market cap of hundreds of millions of US dollars.

It’s not entirely clear whether the market values Dogecoin as a novelty currency, a viable financial asset, or something in between. But few cryptocurrencies have had the impact that the Shiba Inu currency has – if only for its status as a meme coin.