JPMorgan released a report last week entitled “What cryptocurrencies have and haven’t done for multi-asset portfolios.” Published by the firm’s head of Cross-Asset Strategy division, John Normand, the report explores cryptocurrencies’ use for portfolio diversification. 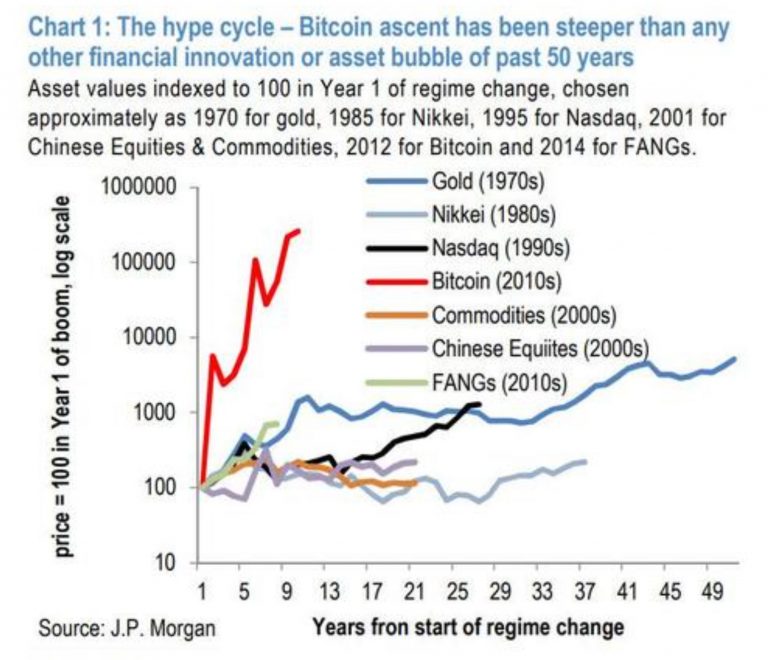 While noting that bitcoin is highly volatile, the analyst hypothetically asked: “Why to bother considering an unconventional and high-volatility hedge?” He then answered his own question by giving three reasons.

Firstly, “Equity and credit valuations look record-rich for a very young business cycle,” the report details. Secondly, “conventional hedges like DM bonds barely serve as insurance when US 10Y rates are near 1%.” The report elaborates that the collapse of DM bond yields to negative levels in Japan and Europe and to 1% in the U.S. has forced investors to focus on alternative investments.

The third reason concerns “some as-yet-unseen shocks (materially higher inflation, economically-debilitating cyber attacks or climate catastrophes),” which the JPMorgan analyst believes “could favor an asset that operates outside conventional financial channels.” For example, Normand cited extraordinary monetary and fiscal stimulus over the past year, which creates general concerns about portfolio vulnerability to a macro or policy shock.

The JPM analyst further asserted that “the mainstreaming of crypto ownership is raising correlations with cyclical assets, potentially converting them from insurance to leverage.” Nonetheless, he noted that for long-term portfolio efficiency:

Small (up to 2%) allocations to cryptocurrencies still improve portfolio efficiency due to high returns and moderate correlations.

As for shorter-term diversification, Normand wrote: “Over shorter intra-month and intra-quarter horizons, crypto assets continue to rank as the poorest hedge for major drawdowns in global equities, particularly relative to the fiat currencies like the dollar which they seek to displace.” In addition, he was quoted as saying:

Crypto continues to rank as the least reliable hedge during periods of acute market stress.

Meanwhile, another JPMorgan analyst has forecasted that the price of bitcoin will reach $146K as competition between the cryptocurrency and gold heats up. Earlier this month, JP Morgan said that the approval of a bitcoin exchange-traded fund (ETF) this year could cause a price drop. Nonetheless, the firm sees $600 billion demand from global institutional investors for bitcoin.

The JPM analyst further asserted that “the mainstreaming of crypto ownership is raising correlations with cyclical assets, potentially converting them from insurance to leverage.” Nonetheless, he noted that for long-term portfolio efficiency: