Institutional Investors Bought $2.8 Billion in Bitcoin Through Grayscale In Q4 2020

Nearly 60% of the yearly inflows into Grayscale products came during the last quarter and the Bitcoin Trust accumulated the most inflows.

Grayscale Investment has done it again with another record-breaking quarter. In its Q4 2020 report, the leading digital asset manager informed that institutional investors had allocated over $3 billion into its product, with Bitcoin accounting for the most significant part.

Despite the challenges that 2020 brought to the financial markets, or perhaps because of them, Grayscale marked its best year to date with massive allocations, primarily from institutional investors.

The first three quarters of 2020 showed record-breaking results, but the Q4 report trumped all data. The company noted that the total investments during the last three months of the year were $3.3 billion, while the amount is $5.7 billion for the entire year. This means that nearly 60% of all investments came in Q4.

Moreover, the company outlined that it had attracted a cumulative inflow of $1.2 billion since its initiation in 2013 to 2019. In other words, the inflows in 2020 were almost five times more than during the previous six years combined.

Additionally, Grayscale highlighted the growing appetite from institutions as 93% of the total inflows in Q4 2020 came from such investors, while the average yearly percentage was 87%. The company noted a “meaningful uptick alongside a number of public announcements from notable investors and asset managers.” 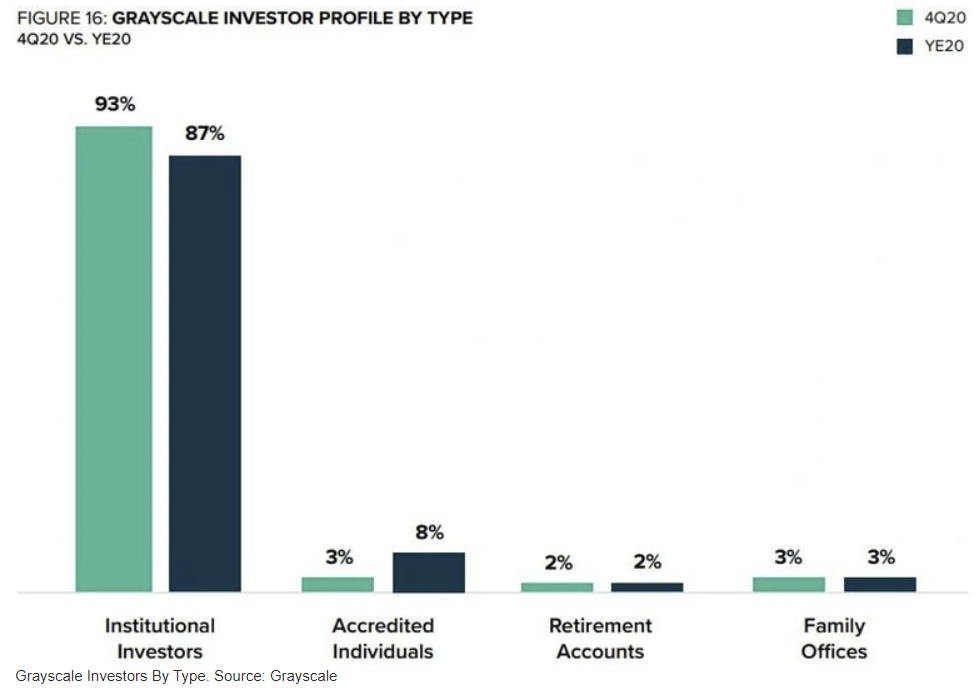 As far as geography goes, 45% of the investments came from the United States, while the remaining 55% were from offshore investors.

As it happened during the previous three quarters, the Grayscale Bitcoin Trust attracted the most funds. In Q4, it garnered $2.8 billion of all inflows – meaning a whopping 85% share.

On a yearly scale, the BTC Trust has accumulated $4.7 billion. Naturally, this means that most of the funds came in Q4 – as the asset price started appreciating.

“While the supply of newly-created Bitcoin has slowed as a result of the halving in May 2020, the inflows into Grayscale have accelerated meaningfully. The amount of Bitcoin flowing into Grayscale Bitcoin Trust during Q42020 was nearly double the amount mined over the same period.” – reads the paper.

GrayscaleSomewhat expectedly, the Ethereum Trust, which follows the performance of the second-largest cryptocurrency – ETH – came after the BTC Trust with $342 million.

Other company products that enjoyed steady inflows during the last quarter of 2020 included Ethereum Classic, Bitcoin Cash, and Litecoin.

It’s worth noting, though, that Grayscale announced recently that it will dissolve the XRP Trust following the SEC charges on the payment processor.