How Does Bitcoin Mining Work?

Bitcoin is a sovereign system of digital money. It has no direct correlation to any real-world currency, nor is it controlled by any government or centralized entity. But people can (and do) use it to purchase real-world items at major retailers.

In order to process these transactions securely, entities called miners compete to solve mathematically complex problems. The miner who is successful in solving the problem adds a block to Bitcoin’s blockchain and receives the reward bitcoins.

Not only is this a reward for the miner’s efforts, but the process of mining is how new bitcoins are generated and introduced into circulation.

All mining starts with the blockchain. This is an online decentralized ledger that records transactions throughout a network. A group of approved transactions is called a “block.” These blocks are tied together to create a “chain,” hence, the term “blockchain.”

In the Bitcoin network, a miner’s goal is to add individual blocks to the blockchain by solving sophisticated mathematical problems. This requires enormous computational and electrical power. While many miners compete to add each block, the miner who solves the problem will actually add the block—along with its approved transactions—to the blockchain. This miner receives a reward of 6.25 bitcoins (as of November 2020).

Note: The reward rate is cut in half every 210,000 blocks, which roughly means every four years. This process, called “halving,” is algorithmically enforced, ensuring a predictable, unalterable rate of introducing new bitcoins into the existing supply—eliminating concerns of inflation. 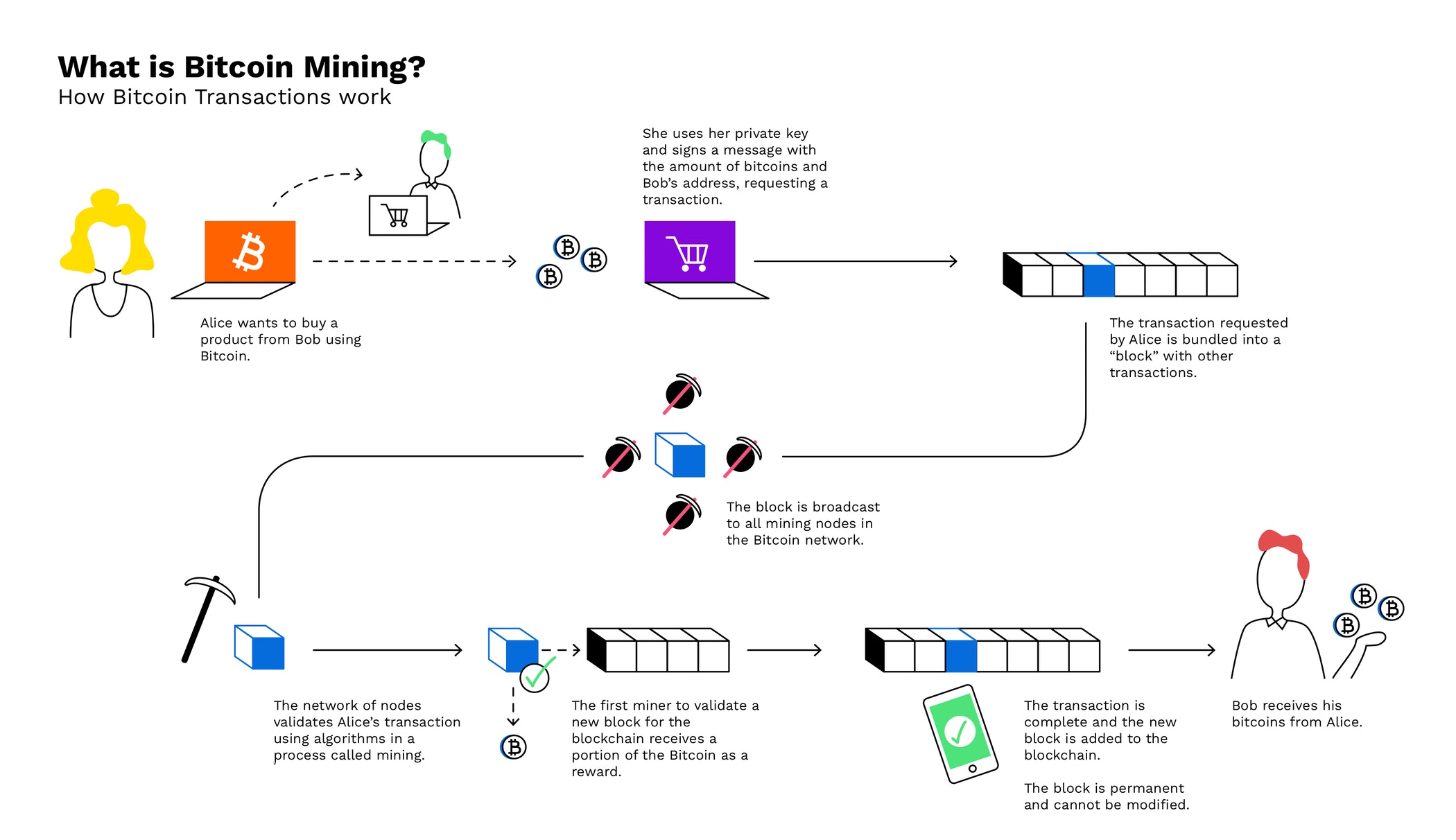 What Do I Need to Mine Bitcoin?

The first and most important piece of equipment needed to mine bitcoin is specialized mining hardware called application-specific integrated circuits, or ASICs. A new ASICs device can cost anywhere from several hundred dollars to $15,000. But the price of mining hardware is only a fraction of the expense involved. ASICs consume tremendous amounts of electricity, the cost of which can quickly exceed the cost of the device using it.

You’ll also need to choose Bitcoin mining software to join the Bitcoin network. This isn’t nearly as expensive as hardware. In fact, there are plenty of reliable software options available for free.

To determine the profitability of Bitcoin mining, all expenses must be considered: hardware, software, and electricity. The current value of Bitcoin, which consistently fluctuates, must also be taken into account, as well as taxes you might pay.

Can You Make Money From Mining Bitcoin?

As of January 2020, the reward per block was 6.25 bitcoins, and one bitcoin is worth almost $35,000. According to these figures, Bitcoin generates over $22,000 worth of value every 10 minutes. If that sounds too good to be true, that’s because it is—in part.

A single ASIC can consume as much electricity as 500,000 Playstation 3 devices, which is why Bitcoin mining simply isn’t profitable from home.

One way in which Bitcoin mining can still be profitable is through mining pools. These enable miners to pool their resources together, adding power, but splitting the difficulty, cost, and reward of mining Bitcoin. There are several well-known Bitcoin mining pools across the globe, including F2Pool, Poolin, and BTC.com.

When a mining pool is rewarded, the individual miners get a very tiny piece of this reward. One bitcoin can be divided by eight decimal places, meaning a transaction of 0.00000001 BTC can be facilitated by the Bitcoin network, thus accommodating thousands of Bitcoin miners who collaborate through mining pools.

How to Start Mining Bitcoin

Though it is difficult, Bitcoin mining is still profitable. While the best results will derive from joining a mining pool, the following steps can be taken to venture into Bitcoin mining:

1.Calculate profitability: Primary expenses will include the cost of electricity and mining hardware. Any profit will largely depend on Bitcoin’s value, which is volatile.

2.Get mining hardware: Once initial calculations are made, expect to spend anywhere from several hundred to several thousand dollars on mining hardware.

3.Choose mining software: Next, you need a platform through which you can access the blockchain and manage your mining. There is a lot of popular Bitcoin mining software to choose from.

4.Install a Bitcoin wallet: When you’ve mined bitcoins, you’ll need a place to store them, called a Bitcoin wallet. Digital wallets let you store your bitcoins in “the cloud” but are a common target for cybercriminals. An offline wallet stores bitcoins in a device that is disconnected from the internet, offering added security.

6.Get started: Once the previous steps are complete, you can start mining now!