At the end of 2018, the crypto market was agreed by all to have entered a bear market as volume and prices constantly weakened and dropped below $6,000. As of 14th December 2018, endless wars have been waged at the price level of $4,000, which seemed to be a critical point of determining an upward or downward trend. In every, battle the bears have always been victorious pushing the price below the critical mark. A chart created by ThinkMarkets and Bloomberg shows the percentage drop compared to the year 2011 and 2014 where the market experienced similar downward trends.

Back in 2017, Bitcoin’s legendary rally was so out-of-this-world that it shocked the mainstream public and took it by storm. It was not until the end of 2017 that its rally was broken and was put to a stop at $20,000. However, that has become a very distant past as the general public interest has dropped significantly and investors and traders started leaving the market. Thus began the downward trend in 2018 and 2019 (with the occasional minor upward spikes). 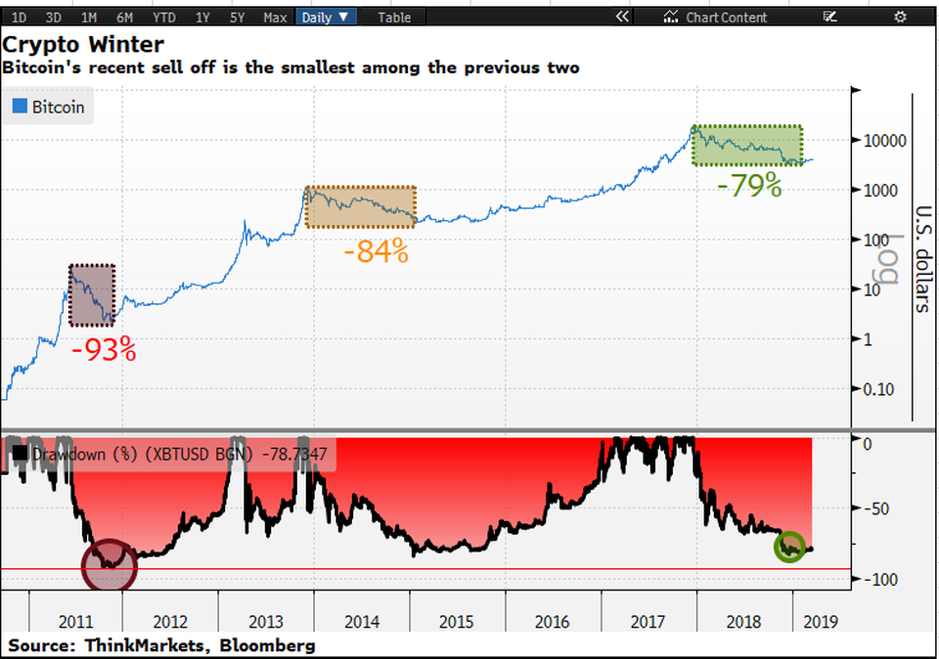 It was not until earlier this month that the longest bear market ever witnessed in cryptocurrency history was broken by a significant trend reversal that raised Bitcoin’s price from $4,200 to $5,200 in less than an hour. With it came a great surge in trading volume that clearly indicates a genuine bull market.

Indications that we are in fact approaching the Crypto Spring started during early April 2019, where Bitcoin rallied by nearly $1,000 in less than one hour, dragging the prices of altcoins across the board with it, including Ethereum, Ripple, Litecoin and Bitcoin Cash. Trading volumes reached epic levels not witnessed since 2017 and most altcoin prices gained by more than 10%.

There has been many assumptions regarding the reason for the current cryptocurrency bull run. For example, CoinMetrics.io stated in a tweet that it was possible that a single trader with an estimated value of approximately $100 million went long and traded in a way to maximize the impact on the price of Bitcoin. Others speculate that the reason for this bull run could be because of Bitcoin’s upcoming halving, which literally means that the network is about to cut in half block rewards for Bitcoin miners. Halving has occurred twice ever since Bitcoin’s existence (once in 2012 and once in 2016) and each time there was a months-long price rally that heralded the halving. Bitcoin’s next halving is set for May 2020. Another notable factor during this bull run is that there was no strong influence from the news or media before the surge. 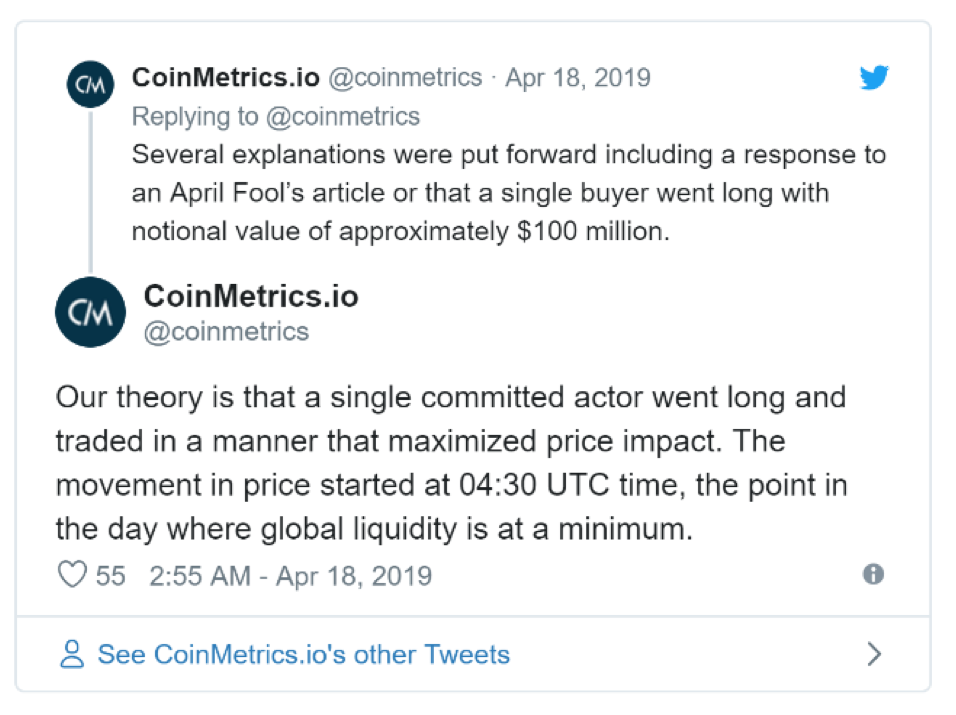 Nonetheless, the bears have yet to give up as seen by the recent pullback during the third week of April. Most indicators and analysts predict that the surge is not over and that crypto prices will continue to climb despite certain difficulties against bearish resistance. The future cannot be predicted and close speculation is needed in order to see where the crypto market is headed next. As this month continues and levels of support and resistance is established by Bitcoin, we will gain a better idea of how likely it is that this rush is sustainable in the long term.

In early April, the best performing altcoin can be no other than Bitcoin’s hardfork currency: Bitcoin Cash. BCH surged by up to 30% to a high of $211.7 on the 3rd of April in less than 24 hours whilst Litecoin is the closest contender with a 17% price surge that put its value at a high of $70.81. Bitcoin Cash and Litecoin is currently valued at $285.93 and $76.11 respectively (as of 21st April).