Bitcoin Hashrate Goes Up Despite Halving, Miners are Resilient

Bitcoin has finally gone through its much-hyped adjustment that reduced the rewards for mining blocks. With miners now receiving only 6.25 BTC per each block found, many anticipated that the event will have a detrimental effect on the network’s hashrate and spark what could very well be a fatal downward spiral for miners.

However, when the block rewards halved on May 11 at 7:23 p.m. UTC, something very strange and unexpected happened.

As Bitcoin’s forks, Bitcoin Cash (BCH) and Bitcoin SV (BSV) both experienced their own block reward halvings earlier in April, many expected Bitcoin’s own reward reduction to have similar consequences. Namely, both BCH and BSV saw their networks’ hashrates drop significantly after the halving, as miners switched off or migrated as soon as block 630,000 was mined.

According to a report from LongHash, BSV’s network hashrate decreased by 60% 14 hours after the halving. BCH’s hashrate, on the other hand, fell by more than 80% in the 24 hours after having, another report found.

All of this led to the crypto industry expecting a significant drop in Bitcoin’s own hashrate almost immediately after the halving, as many believed miners would switch off en masse in order to avoid losses.

Graph showing the hashrate of the Bitcoin network.  (Source: CoinWarz)

The 6% drop actually represents a return to the “average” hashrate the Bitcoin network has seen in the past week. LongHash reported that Blockchain.com’s seven-day average of the Bitcoin hash rate currently sits at 120 exahashes per second.

This could be a result of several factors.

Firstly, some analysts believe that the revenue from transaction fees is what is sustaining most miners even after their block rewards have been slashed in half. Zack Voell said that fees made up around 15% of the block reward, explaining that the increase in fee revenue miners have seen after yesterday’s halving is much more pronounced than it was after the 2016 halving. 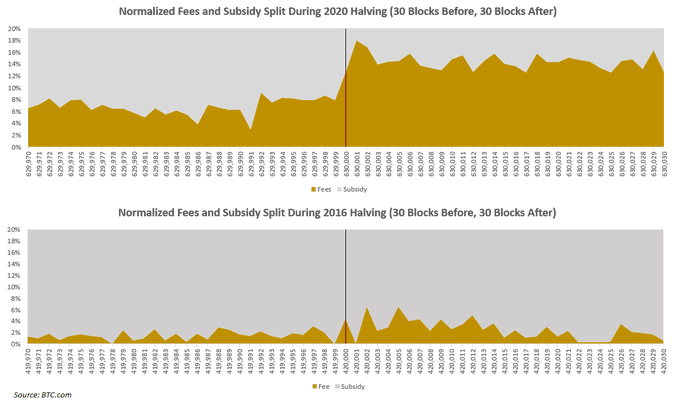 Comparing the fees and subsidies following the 202 and 2016 halvings.  (Source: Twitter)

However, this momentum might not last long for Bitcoin miners.

Matt D’Souza, a hedge fund manager and the chief executive officer of Blockware Mining, said that a large number of miners are at risk of “extreme capitulation.” He explained that data from Blockware Mining showed that around 30% of Bitcoin’s hashrate is made up of mining hardware that is operating at a breakeven price.

One thought on “Bitcoin Hashrate Goes Up Despite Halving, Miners are Resilient”