Bitcoin Halvings — What They Are And Why They Happen.

The last Bitcoin halving took place in May 2020, and we are only now seeing a Bitcoin price rise — could the two be connected?

What Is a Bitcoin Halving?

A Bitcoin halving is exactly what it sounds like — it’s when the rewards that Bitcoin miners receive for supporting the Bitcoin blockchain are cut exactly in half.

Miners support the Bitcoin blockchain by using computing power to confirm Bitcoin transactions and thus add new blocks to the blockchain. They are rewarded for their work with Bitcoin block rewards, which is how new Bitcoin is created. While it might seem illogical that cryptocurrency miners would continue to accept these mining reward “salary” decreases, so to say, there actually is a very important reason why halvings are built into the Bitcoin system.

When Satoshi Nakamoto, Bitcoin’s pseudonymous founder, created Bitcoin back in 2008, he/she/they decided that Bitcoin would have a hard limit of 21 million. It was important that coins were released gradually into the market, but it was just as important that they would also have a predictable decaying rate. With this goal in mind, Satoshi created the terms that meant that every 210,000 blocks, the rewards that miners receive are halved. There will only ever be 32 halvings — once the 32nd halving takes place, the maximum supply of Bitcoin (21 million) will have been reached. 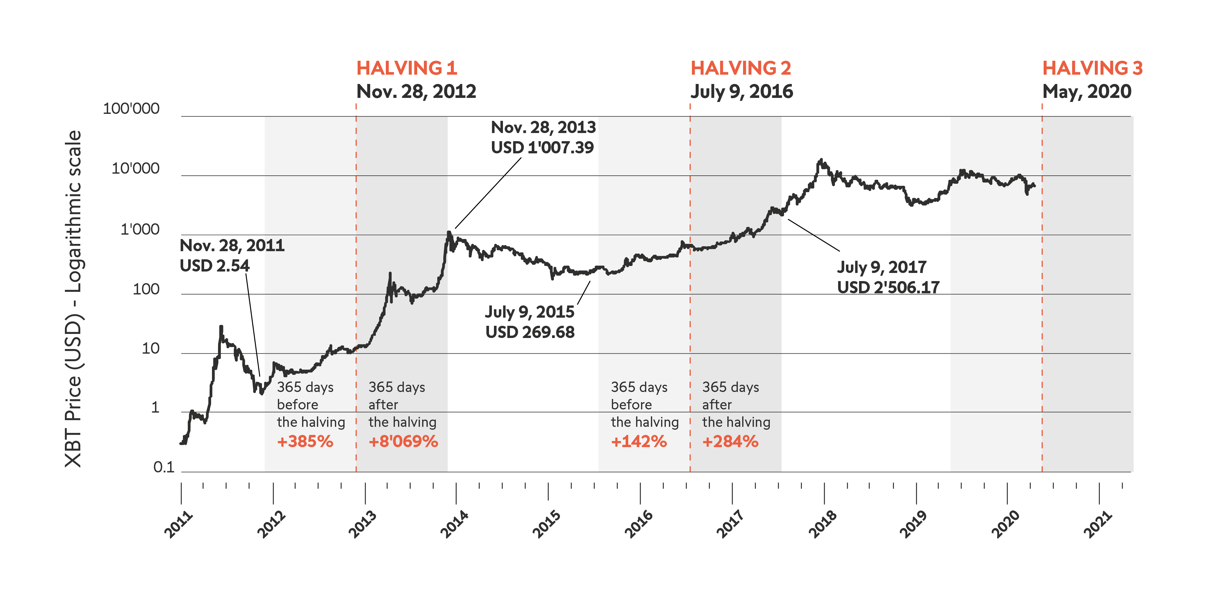 What Happened During the Last Halving?

The last halving (or halvening) took place on May 11, 2020, during the height of the COVID pandemic. While the tension was high and the event was highly anticipated, the halving went off with no problems.

When Is the Next Bitcoin Halving?

The next halving will take place at block 840,000, which CoinMarketCap’s Bitcoin halving countdown clock shows that will be in about four years.

Do Bitcoin Halvings Change the Price of Bitcoin?

In the past, previous halvings have affected Bitcoin’s price, but not always right away. After the very first halving on Nov. 28, 2012, Bitcoin was worth about $12. A year later, Bitcoin had risen about 8,500% to reach close to $1,032 — just one of the positive price movements in Bitcoin’s typical volatility.

According to the founder of F2Pool — whose mining pool mined the very last block in the Bitcoin network before the Bitcoin halving — the loss of profitability for miners had not been greater than they had expected. However, in his opinion, a Bitcoin halving event means that miners have to decide if they can afford to continue mining, and that might mean looking for lower electricity costs and other ways that they can save on overall costs to keep their mining machines running and earning new coins.

The Bitcoin network hash rate is still increasing, although it has gone up and down for a variety of factors as simple as the rainy season in China, where many mining rigs are located.